BLOG
The Keyboard Shortcuts You Didn’t Know You Needed 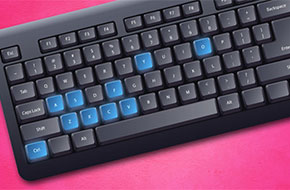 Check out these uncommon, but surprisingly handy keyboard shortcuts

Once you know these quick cheats, you’ll wonder how you lived without them!

Most everybody knows how to copy and paste with CTRL+C and CTRL-V. Maybe some have expanded their knowledge to include the “cut” of CTRL-X, or the “undo” accomplished with CTRL+Z. But the PC keyboard offers a truly impressive number of button combinations to minimize your time navigating menus. On many people’s keyboards, the ALT tab is never touched, despite its usefulness. Other keys, like SHIFT or the F# keys (F1, F2, etc.) aren’t used nearly as often as they should be. Keyboard shortcuts save a lot of time and a lot of mouse clicks, so there’s no reason not to use them!

Some of the helpful, unknown keyboard shortcuts relate closely to the widespread ones. For example, to redo something (maybe after accidentally undo-ing it with CTRL+Z), just hit CTRL+Y. Depending on the size of what was deleted, this could potentially save huge amounts of time spent recreating work that was already done. Another, especially useful in Excel, is CTRL+ALT+V. This brings up the Paste Special menu, which allows for pasting content with or without the formatting, just the values, just the function, and more.

Others don’t relate as closely, but that doesn’t stop them from being useful. ALT+TAB is a fairly common shortcut, which allows you to quickly change between windows of programs. Need to change quickly between Word and Excel? ALT+TAB does that in one fluid motion. Most people probably know the way to Save using CTRL+S, but pressing F12 will immediately do a “Save As,” without having to go up into the menu at the top.

These shortcuts are useful outside of programs like Word and Excel too. Pressing the Windows Logo+D minimizes all windows and shows the desktop – especially helpful if you have a lot of open windows. If you’re deep into a folder tree, pressing Backspace takes you up a level to the parent folder. Want to make a copy of a folder? Just hold down CTRL while you drag that folder somewhere else. If you want to make a desktop shortcut, hold down CTRL and SHIFT while you drag the folder to the desktop.

Whether you’re a casual PC user or a professional website developer like us over at Mr. WPress, keyboard shortcuts can make life much easier. Check out a truly comprehensive list on LinkedIn if you want even more. And be sure to return to this blog next week for the Mac edition!